You’re Invited! Be an Angel for Animals

Those of you who know me are already aware of my deep commitment to helping animals in need. One of the ways that I do this is by holding an annual gift raffle and hosting a holiday fundraiser where we sell handmade items and all the proceeds go to small local animal-focused nonprofits. END_OF_DOCUMENT_TOKEN_TO_BE_REPLACED

If You Can’t Speak English, You Can’t Cut My Hair!

As I am finishing the last few chapters of this book, I look back and am amazed at some of the intolerant experiences I went through as a minority woman entrepreneur. I was committed to training and helping immigrant workers succeed at their chosen career, yet I encountered subtle and sometimes overt discrimination as I went about trying to establish my business. I want to share this excerpt with you at this post election time where everyone is feeling scared and uncertain. I want us to stand firm and commit that “WE WILL NOT GO BACK…WE WILL KEEP MOVING FORWARD.”

Here is the selection from my new book:

I hired Lan after she graduated from the cosmetology program at a local community college. She was a young, immigrant woman from Vietnam. On her first day of work, Lan came into the salon an hour before her scheduled time to learn English in the back room of the salon.

END_OF_DOCUMENT_TOKEN_TO_BE_REPLACED

Why Can’t I Get a Good Shampoo?

Every now and then, I reflect back on some of the experiences I had when I was growing up. Many of them have shaped how I perform the services in my salon today. One of the things that frequently comes to mind is the humdrum way that salons shampoo hair. I was only sixteen and this is my recollection of what happened and why it made such an impression on me…

The initial greeting with my stylist, Lydia went fine. After that, the she took me back to an area that was lined with shampoo bowls and chairs and sat me down in he closest chair. She guided my head down to rest nicely into the groove of the bowl. Thinking, “This is great,” I succumbed to her direction. Once the shampoo process started, I could feel the warm trickle of water on my head. The warmth of the water gave me a comforting feel. Before my hair was thoroughly saturated, the shampoo was poured on my head and the massaging and scrubbing began.

I sat there thinking, “Okay it’s beginning to feel good…just apply a little more pressure with your fingertips and keep going.”

Unfortunately, no matter how much I wished for a stronger and more stimulating massage, it never happened. Instead, Lydia continued to slide her fingers lightly on the surface of my scalp, back and forth, stimulating my scalp just enough, causing my head to itch. END_OF_DOCUMENT_TOKEN_TO_BE_REPLACED

To My Readers, I wrote this story for the North American Post. I wanted to share this with you because it’s my favorite story. I spent time with Ginger’s Pet Rescue, helping unload the animals that were rescued from various puppy mills in Washington state. The heart-breaking moment was when I saw the rescued dogs in the back of a large van as Ginger brought them into a parking lot of her restaurant. Each was scared and shaking so bad that we had to entice them with treats, love and patience to lure them out of their crates. One little poodle dog’s leg broke instantly as he tried to step out of his kennel. This poor dog had never been outside of his kennel in his 2 years of life. Another sickly dog had deceased puppies still inside her stomach that needed to be removed. These poor dogs needed so much medical care before they were ready to go out for adoption that I held a fundraiser in my salon, Studio 904 to raise money to help with their medical care. I am happy to say, over 100 people responded to my call and we raised $10,000 for Ginger’s Pet Rescue.

Here is a story of one very lucky dog…

The minute my eyes connected with Rudy’s, I knew that he was a very sweet and special dog. Sitting inside a small, wire cage, his soulful brown eyes felt like they were piercing right into my heart. His caramel-colored, short hair was shiny and smooth as he quietly sat and pleaded to me, “Please, help me.” On top of his kennel was a handwritten sign that read: “Rudy – 2-Year-Old Male – Mixed Breed.”

As I glanced around the spacious room, there were rows of dogs sitting in small crates alongside about two-dozen other small breed dogs. They were all at an adoption event that was sponsored by Ginger’s Pet Rescue. The reason I decided to attend this particular gathering was to see Cesar Millan, the world famous “Dog Whisperer.”

But, back to the very beginning…This whole thing started a few hours earlier when my niece, Geri Lynn called and asked, “Aunty Kay, do you want to go see Cesar Millan at the Ginger’s Pet Rescue event? Can you call Uncle Gary to see if he’d like to go with us?”

When I called and invited Gary, he said, “Why do you want me to go? You know that I’m not looking for a dog.”

I don’t usually do this, but I begged him, “Oh, please, come with Geri Lynn and me; I want to see Cesar Millan. Don’t you want to meet him in person instead of simply watching him on TV performing his miraculous, dog behavior modifications?” After a lot of arm twisting, Gary reluctantly agreed to join us. END_OF_DOCUMENT_TOKEN_TO_BE_REPLACED 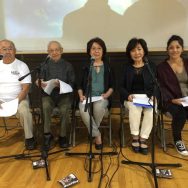 Attending book readings has never seemed very interesting to me but when I published Keiko’s Journey, I started getting requests to come and do book readings. I wondered, how could I present my book in a way that was more engaging? END_OF_DOCUMENT_TOKEN_TO_BE_REPLACED

Following is an excerpt from my new book, which will be published this fall. The book focuses on the life-changing  journey that I took while building my Studio 904 Salon. I hope you enjoy this small peek inside.

Here’s how it all began…

One day in 1982, Richard, a good client of the salon, had an unusual request for me. He was the director of the Northwest Cerebral Palsy Center in Seattle and an active volunteer in the community. As he looked at his finished haircut, pristine as usual, he said to me, “Kay, I was wondering if you could do me a big favor.”

“I was wondering if someone from Studio 904 would be willing to come to the center and give haircuts to the young men who reside there.”

“Don’t they have someone who already cuts their hair?” I asked.

“Well, we do have a few stylists who come and give haircuts, but you should see what they do to our residents. They just carelessly buzz up their hair, making them look more disabled than they already are. These are young men and they care about how they look. I have been trying to think of a way to give them a great-looking haircut just like the one I got today,” said Richard, as he smoothed his hands over his freshly groomed hair.

“Let me see what I can do,” I told him. END_OF_DOCUMENT_TOKEN_TO_BE_REPLACED

My Journey to Yours by Keiko Kay Hirai

I stood in front of the Seattle Buddhist Church, all dressed up in my new pink sweater and full skirt with pink and grey checks. My black, patent-leather Capezio flats felt a little tight, but I didn’t care. My biggest hope was that I would fit in with the rest of the girls. END_OF_DOCUMENT_TOKEN_TO_BE_REPLACED

This is a Popular Article!

I received so many positive comments about this article (published in the North American Post a few weeks ago) that I want to share it with you. Do You Have a Mentor?, part II. If you don’t have a good Mentor like Joe, I suggest you get busy and start looking for one. I can guarantee that you will get a new outlook on life! END_OF_DOCUMENT_TOKEN_TO_BE_REPLACED