Announcing the Opening of the Artful Giving Shop!

When I was a little girl, I dreamed of sharing my art with the world. Today, I’m excited to announce that my dream has come true with the launch of my online gift store, the Artful Giving Shop. Browse the handmade cards, original artwork, and prints to see what sparks joy in your soul. Each piece arose from a place in my heart where those sparks were truly needed.

Handmade art restores creators, givers, and receivers.
Happy days were scarce while growing up in Japan during the bleak days following the end of World War II. My fondest memories, were making colorful hand-made items using paper, yarn and scraps of Japanese fabrics. I sold them to the neighborhood kids in exchange for play money. I still remember the expressions of joy on their faces as they carefully picked out their choices from the handmade tags, cloth bean bags and origami folded candy wrappers while visiting my make-believe store. It made me feel special when Mother marveled at the array of artwork and craft items I created and exclaimed, “Keiko, wait and see. When you grow up, you will have your own gift store!”

At the age of 11, when my mother brought me to America, I began the arduous task of learning English and acclimating to the American school system. It was often difficult and humiliating, but when things got a little bit too hard for me to take, I always brought out my watercolor set and painted. Art was the one thing that uplifted my spirit, no matter how bad things were.

Artful Giving Shop was created to bring some of those magical moments that I have experienced. I’d love to have you visit my new on-line store, click on the SHOP tab above or go to www.artfulgivingshop.com. While browsing, I hope you find the perfect something that will bring you the same joy that I experienced while creating it.

When you buy my art, you are giving a helping hand to abused animals.

A 10% of proceeds from every sale will be donated  to rescue and rehabilitate abused farm and domestic animals. 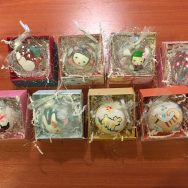 There is so much to be thankful for and no time like the holidays to pause and reflect on what really matters. Many of you know how passionate I am about helping animal welfare organizations do their important work. Whether it’s Pasado’s Safe Haven rescuing neglected donkeys, Old Dog Haven finding homes for elderly pets, Ginger’s Pet Rescue saving dogs from death row at overcrowded shelters, or Precious Life Animal Sanctuary providing a home for abused and abandoned farm and companion animals, I’m so grateful that these organizations exist and do such important work decreasing animal suffering.

Being able to use my business to draw attention and raise money for this cause has meant so much to me. This year was our 10th Annual Angels for Animals event and it was bigger and better than ever. What a delight to see clients and friends come out to purchase handmade gifts, cards, ornaments and raffle tickets to win fun prizes. If you were able to be a part of this event, I sincerely thank you from the bottom of my heart. If you couldn’t make it this year, don’t worry, we’ll host another big event next year to keep helping animals in need! 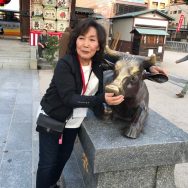 Memories, Old and New, in Japan

My recent trip to the southern islands of Japan, Okninawa, Shigata and Kiyushu Islands was soulful and nostalgic for me. My Father and Grandmother’s graves rest in Fukuoka, Kiyushu. Things have changed so much in that area that I didn’t recognize anything as how I remembered it.

The most memorable thing I learned was… END_OF_DOCUMENT_TOKEN_TO_BE_REPLACED

What Does a Homeless Donkey Have in Common With a Hair Salon?

Wow, it’s been a busy summer for us…same for you? Now that summer is nearing an end, I wanted to take a few minutes and show you what my salon, Studio 904 Hair Design has been up to. Enjoy the video as we go off for a weekend picnic on the grounds of  Pasado’s Safe Haven to spend time with Ole and Jacques, our newly adopted Donkeys. We will post photos and videos after our visit so you will get to see our precious moments with the animals!

What Does a Homeless Donkey Have in Common with a Hair Salon? At first glance, not a whole lot. END_OF_DOCUMENT_TOKEN_TO_BE_REPLACED

If you are like me, you’ve probably spent some time reflecting on the past year. I’m sure that among the good and the disappointments you’ve experienced there are some events that you remember fondly with a smile. I encourage you to reflect on your past year and focus on the most uplifting events. Today I want to share a video of an event that always brings tears of joy and a smile to my face. END_OF_DOCUMENT_TOKEN_TO_BE_REPLACED

I hope you will enjoy seeing my holiday tips that I posted a year ago. I still like these ideas so I wanted to share them with you again…. END_OF_DOCUMENT_TOKEN_TO_BE_REPLACED

To My Readers, I wrote this story for the North American Post. I wanted to share this with you because it’s my favorite story. I spent time with Ginger’s Pet Rescue, helping unload the animals that were rescued from various puppy mills in Washington state. The heart-breaking moment was when I saw the rescued dogs in the back of a large van as Ginger brought them into a parking lot of her restaurant. Each was scared and shaking so bad that we had to entice them with treats, love and patience to lure them out of their crates. One little poodle dog’s leg broke instantly as he tried to step out of his kennel. This poor dog had never been outside of his kennel in his 2 years of life. Another sickly dog had deceased puppies still inside her stomach that needed to be removed. These poor dogs needed so much medical care before they were ready to go out for adoption that I held a fundraiser in my salon, Studio 904 to raise money to help with their medical care. I am happy to say, over 100 people responded to my call and we raised $10,000 for Ginger’s Pet Rescue.

Here is a story of one very lucky dog…

The minute my eyes connected with Rudy’s, I knew that he was a very sweet and special dog. Sitting inside a small, wire cage, his soulful brown eyes felt like they were piercing right into my heart. His caramel-colored, short hair was shiny and smooth as he quietly sat and pleaded to me, “Please, help me.” On top of his kennel was a handwritten sign that read: “Rudy – 2-Year-Old Male – Mixed Breed.”

As I glanced around the spacious room, there were rows of dogs sitting in small crates alongside about two-dozen other small breed dogs. They were all at an adoption event that was sponsored by Ginger’s Pet Rescue. The reason I decided to attend this particular gathering was to see Cesar Millan, the world famous “Dog Whisperer.”

But, back to the very beginning…This whole thing started a few hours earlier when my niece, Geri Lynn called and asked, “Aunty Kay, do you want to go see Cesar Millan at the Ginger’s Pet Rescue event? Can you call Uncle Gary to see if he’d like to go with us?”

When I called and invited Gary, he said, “Why do you want me to go? You know that I’m not looking for a dog.”

I don’t usually do this, but I begged him, “Oh, please, come with Geri Lynn and me; I want to see Cesar Millan. Don’t you want to meet him in person instead of simply watching him on TV performing his miraculous, dog behavior modifications?” After a lot of arm twisting, Gary reluctantly agreed to join us. END_OF_DOCUMENT_TOKEN_TO_BE_REPLACED

Thank you for attending the launch event for my new book, “Keiko’s Journey,” on December 13 at the Nagomi Tea House. I was overwhelmed and so grateful to see the huge turnout of friends, family, and community members. END_OF_DOCUMENT_TOKEN_TO_BE_REPLACED